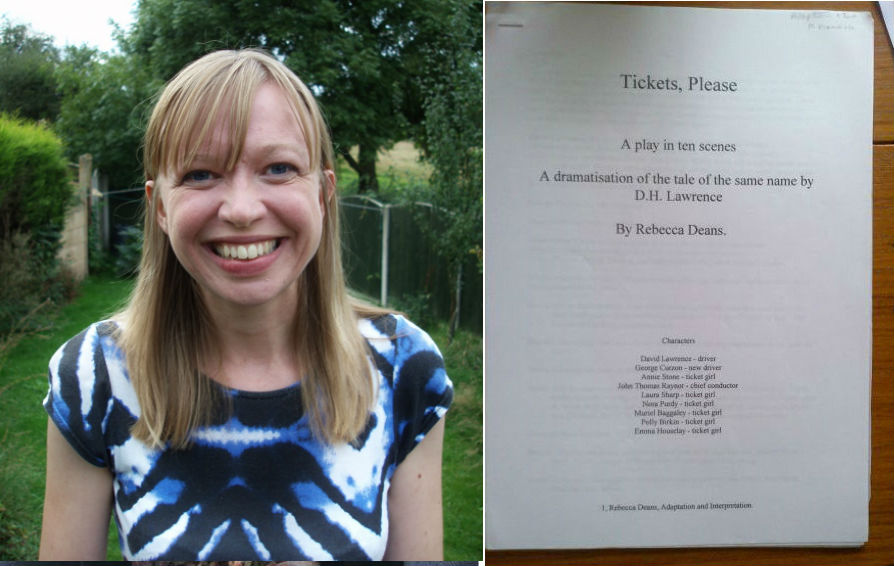 Derbyshire writer Becky Deans has adapted Lawrence’s short story Tickets, Please and would love to see it performed on a tram at Crich Tramway Village. The story has particular resonance for Becky as the route it mentions goes through her home village of Codnor. Tickets, Please tells the tale of John Thomas Raynor (nicknamed Coddy) who flirts with the female conductors on Annie Stone’s line. But the women eventually turn on him and he’s forced to confront the consequences of his behaviour.

My first interest in the story Tickets, Please was the location. The tramline it describes started in Ripley, Derbyshire. The ‘last little ugly place of industry, the cold little town that shivers on the edge of the wild, gloomy countryside beyond’ is where I went to school. I was attracted by Lawrence’s love-hate relationship with the places of his youth and wanted to adapt the story for local people.

I was transfixed by a story that was set in the village that I grew up in. Codnor was on the route of the Ripley Rattler. A painter called Ruth Gray (who is based in Belper) did a whole series of pictures based on the route and I own one of the Codnor originals. She exhibited them at Durban House in 2014.

I’d read Lawrence before, but to have him prowling on my doorstep, meeting and breaking the hearts of local women, was heaven. For in my eyes, Lawrence is John Thomas, even though I have also created a character called David Herbert to act as narrator within the play. I don’t think Lawrence would be upset at being two characters in a play. I have also added a new character, called George Curzon, who has the function of being the outsider, so can have things explained to him.

The tram that Lawrence describes first set off in 1913 and was retired in 1932 in favour of the trolley bus system. It was known as the Ripley Rattler and took two hours to reach Nottingham. It was the principal way to travel between the mining villages ‘from village to village the miners travel, for a change of cinema, of girl, of pub’. The story immortalises a lifestyle, culture and dialect that largely left the area when technology moved on and the mines closed, something that I wanted to preserve and recreate through a one-act play.

I enjoy Lawrence’s use of dialect within the story. Dialect is something I use in my stories; I revel in the quirks of language. And if we believe the book Ey Up Me Duck, Dialect of Derbyshire and the East Midlands by Richard Scollins and John Titford, we could say it is the same in Nottinghamshire as Derbyshire. In truth there are nuances, even now.  Derby dialect is not quite the same as the Amber Valley dialect, but some of the language of miners seems to be constant. Phrases such as the deep benk seem to be fairly stable – I picked up this phrase from my grandad.

The surnames of the characters are also recognisable. The Birkins used to run the garage my grandad went to in Codnor and there are also many Burgins in the cemetery in Codnor too. I know or have known Housleys, Purdys, Baggaleys and Curzons. There are Meakins throughout the local area too.

I also relish the questions that Lawrence poses about gender and gender in wartime. Wartime allows the girls to step outside their conventional gender roles and become ‘fearless young hussies’. They outnumber and are stronger than the men they work with, who are mainly ‘men unfit for active service: cripples and hunchbacks’. In scene two Nora and Polly almost come to blows over John Thomas, reinforcing the way that wartime has brought out what may be deemed more masculine tendencies. The collectors ‘have all the sang-froid of a non-commissioned officer’: they are the front line of law on the tram and therefore their relationships are characterised by the urgency of wartime.

I am now seeking a school or community group to work with to help me develop and put on this play and discuss the interesting relationships between men and women within it, as well as the changes to the language and landscape of the coalfields area.

Becky Deans is a Derbyshire writer with an MA in Creative Writing from UEA. She published her first novella, Exposé, in 1999 (UEA texts series) and has short stories and poems in various publications, as well as advertisements across the UK press. As a saxophonist with a diploma in saxophone performance, she is currently exploring song writing while singing and playing in a duo and a trio in the pubs of Derbyshire. She has recently been selected for the Derbyshire Residencies: Writing Ambitions Scheme funded by Derbyshire County Council and the Arts Council, and is looking forward to taking her writing forward as she delivers creative writing sessions to a community group.