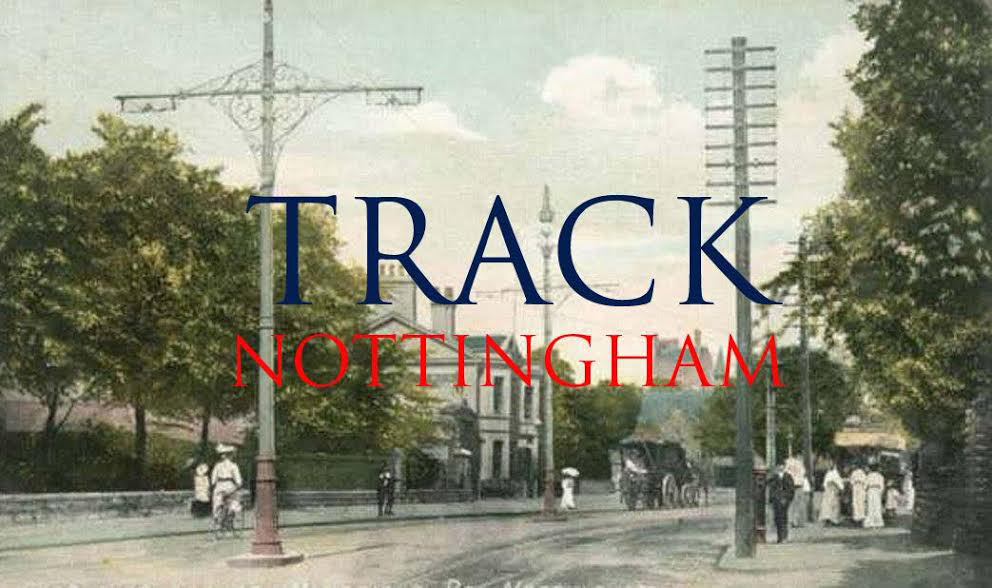 Shaun Belcher started a multimedia project in 2010 exploring local history in two locations, one of which was Nottingham. He began uncovering some incredible stories, such as Albert Einstein giving a guest lecture at Nottingham University College (as it was known then) on 6 June 1930. A section of blackboard he used to show his calculations is preserved in the university’s archives. The university also holds many artefacts relating to DH Lawrence, but we’ll come back to his connection with the College later on.

As Shaun began to amass more of these hidden histories he began to share his findings through art, talks and more recently, poetry. For the 2018 Nottingham Poetry Festival the poems were written ‘large’ and illustrated for display in Jermy & Westerman’s secondhand bookshop on Mansfield Road.

The project has the working title of Track Nottingham which Shaun explains “takes individual ‘derives’ as the starting point for poems that literally ‘track’ individuals’ movement through urban and rural space and their interactions with the current technology to analyse how art and technology interact.” 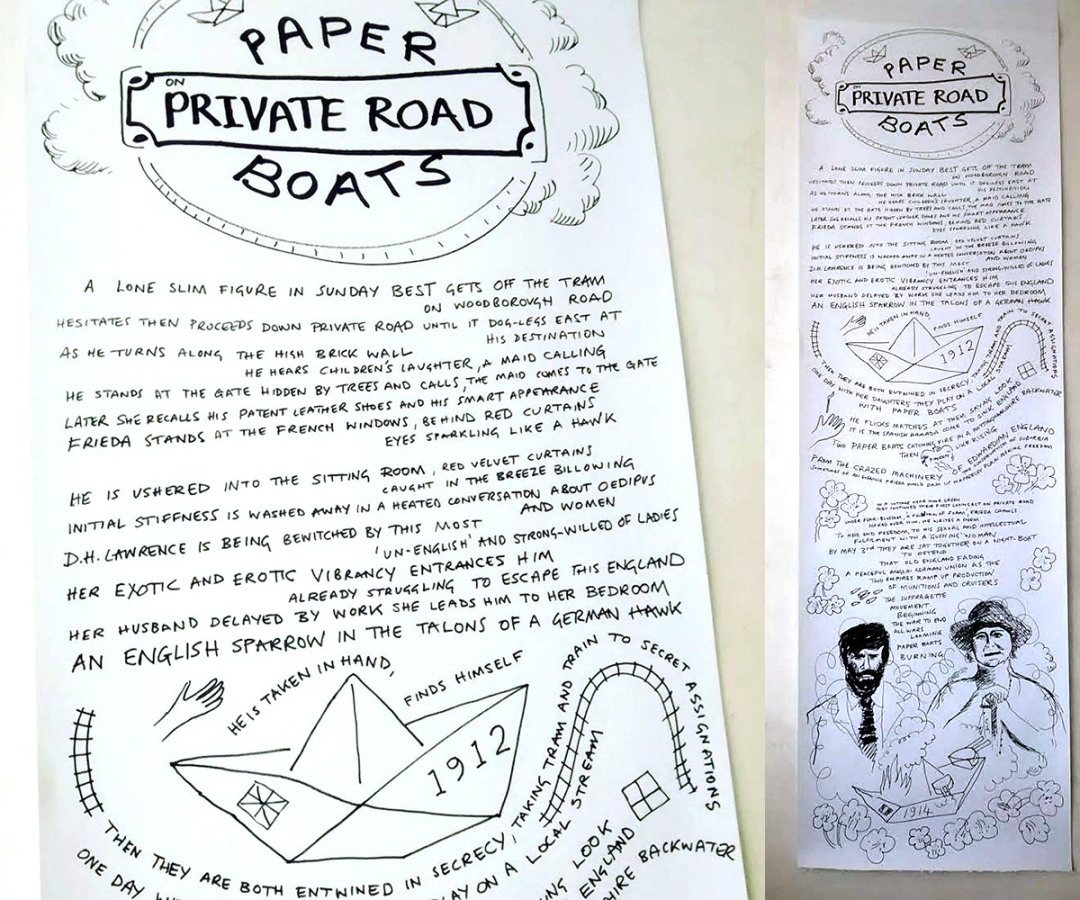 So far he has written three poems about Picasso, Chaplin and DH. Lawrence which neatly bookend three concurrent aspects of modernity in Painting – Film – Literature. Shaun said “I am interested in the relation between technology and how these individuals were enabled to move and in turn have their works ‘distributed’ by the new channels of literary and film distribution and their link to networks of travel especially the railway.” Through poetry, Shaun hopes to map these hinterlands of change. He is keen to stress that “no person is an island and no artist is independent of the tentacles of mass distribution and technological change”. The poems are also stories about relationships played out against 19th, 20th and 21st century backdrops. One of these relationships is that of DH Lawrence and Frieda Weekley.

After coming first in the King’s Scholarship Examination in 1904, Lawrence received a grant to attend Nottingham University College (now part of the Arkwright building owned by NTU) but had to work for a year as an uncertified teacher at the British School in Eastwood in order to save £20 for the advance fees. He enrolled in September 1906 at the age of 21 and graduated in 1908. Although he found the experience disappointing he was interested in the botany and French course taught by Prof Ernest Weekley, the then husband of Lawrence’s future wife Frieda. Frieda and Ernest Weekley lived on Private Road, Sherwood and an enthusiastic Lawrence came to have a chat with his Professor one afternoon and immediately fell in love with Frieda. There are varying accounts on how quickly the two became lovers but which ever version of history you believe, the relationship was built on pain and against the backdrop of World War I. This had particular resonance as Frieda was not only a married woman, but a distant relation of Manfred von Richthofen, the “Red Baron”. All of which inspired Shaun to write the following poem.

A lone slim figure in Sunday best gets off the tram on Woodborough Road,
Hesitates then proceeds down Private Road until it dog-legs east at his destination
As he turns along the high brick wall he hears children’s laughter, a maid calling
He stands at the gate hidden by trees and calls, the maid comes to the gate

Later she recalls his patent leather shoes and his smart appearance that day
Frieda stands at the French Windows, behind the red curtains, eyes sparkling like a hawk
He is ushered into the sitting room, red velvet curtains caught in the breeze billowing
Initial stiffness is washed away in a heated conversation about Oedipus and women

Then they are both entwined in secrecy, taking tram and train to secret assignations
One day with her daughters they play on a local stream with paper boats
He flicks matches at them saying look it is the Spanish Armada come to sink England
Two paper boats catching fire in a Nottinghamshire backwater, then phoenix-like rising

From the crazed machinery of Edwardian England, the conservatism of suburbia
Sometimes of an evening Frieda would dash up Mapperley Plains just seeking freedom
In a cottage near Moor Green they continued their first loving act on Private Road
Under Pear-blossom, ‘a fountain of foam’, Frieda crawls naked over him, he writes a poem

To her and to freedom, to his sexual and intellectual fulfilment with a gushing woman
By May 3rd they were sat together on a night-boat to Ostend, that old England fading
A peaceful Anglo-German union as the two empires ramped up production of munitions and cruisers
The Suffragette movement beginning… the war to end all wars looming. 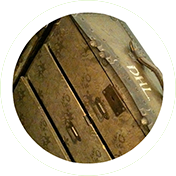 In the DH Lawrence Memory Theatre we want to address various aspects of Lawrence’s life through artefacts.  How do we get across Lawrence’s relationship with Frieda? If Ernest Weekley hadn’t excelled in his teaching, Lawrence would never have visited his house. Can we convey this chance encounter somehow? In 2019 we will be building our Memory Theatre and retracing Lawrence’s savage pilgrimage both physically and digitally. If you have an idea for an artefact, get involved and submit ideas here.