On the Dangerous Ambiguity of the prefix ‘Eco’

In this guest blog, Stephen Alexander, author of Torpedo the Ark, questions the use of the prefix ‘eco’ for a wider discussion around language and fascism, blood and soil.

Many scholars – including some who should know better – continue to fetishise the prefix eco- and think that by simply placing it in front of words including criticism, feminism, and politics, they can sex-up their research and immediately make it seem more vital and contemporary.

But ecological thinking – which, ironically, often prides itself on being radical – has a long and essentially conservative history that can be traced back to figures on the völkisch far-right keen to promote a pessimistic vision of the world that is not only anti-urban, anti-capitalist and anti-science, but fundamentally illiberal and anti-humanist in character. Indeed, whilst this post-Romantic German tradition pre-dates National Socialism, it was nevertheless within the Third Reich that such thinking was first put into practice and formed a key component of Nazi aesthetics and ideology.

Now, of course, I’m not suggesting that a concern for the environment automatically makes one a fascist. But I am pointing out that nature-based ideologies are very often used to legitimate Social Darwinist beliefs and that many reactionaries have called for a neo-feudalism based upon rural values and natural divisions. We can see this in the work of two figures closely associated with ecologism in England during the inter-war period – John Hargrave and Rolf Gardiner.

The former was convinced that modern life had produced a ‘mentally and physically deficient race’ that couldn’t even be relied upon to breed sufficiently. A self-declared pantheist and Anglo-Saxon nationalist, Hargrave hoped to create a new national myth or substitute folk-memory for the English. To this end, he founded a movement in the 1920s – the Kindred of the Kibbo Kift – which was meant to establish a counter-culture founded upon ‘the distinctive German brand of serious nature-worship’.

In practice, this meant that members spent most of their time hiking, camping, or making their own clothes, but they lent all their activities an earnest spiritual significance that rather absurdly combined Native American ritual with Norse mythology. Although they never numbered more than a few hundred members, the KKK could claim several public figures as supporters, including Havelock Ellis, Julian Huxley, and H. G. Wells. D. H. Lawrence was at least partly sympathetic. In a letter to Rolf Gardiner, he wrote:

‘I read the Kibbo Kift book with a good deal of interest. Of course it won’t work: not quite flesh and blood. […] The man alternates between idealism pure and simple, and a sort of mummery, and then a compromise with practicality. What he wants is all right – I agree with him on the whole, and respect him as a straightforward fighter. But he knows there’s no hope […] And therefore, underneath, he’s full of hate.’[1]

By the outbreak of the Second World War, Hargrave had become increasingly isolated and irrelevant on the political scene. And by the end of the War he’d found his true calling as a faith healer and eco-mystic.

As for Rolf Gardiner, Lawrence profoundly influenced the thinking of a man who would become one of the founders of the Soil Association in 1945. But what really interests is how easily Gardiner also came under the sway of National Socialism. Always an active Germanophile and Nordicist, Gardiner became a fervent exponent of Blut und Boden in England in the 1930s and dreamt of an Anglo-German political union.

His major written work, published in 1932 and dedicated to Lawrence, is a semi-religious work entitled World Without End. In it, Gardiner calls for a spiritual rebirth and a new attitude towards ‘nature, the soil, to sex and to politics’.

Whilst, to his credit, he rejected any ‘nonsensical racial theory’ – not least because of his own half-Jewish background – he nevertheless enthusiastically greeted the Nazi assumption of power in 1933 and was soon on warm personal terms with the Nazi Minister for Agriculture Walther Darré. Both men agreed on the importance of living according to ecological law, which, of necessity, means the subjection of the individual to the ‘larger organic authority’ of the Natural Order.[2]

In sum: we all need to exercise caution before we take an ecocritical turn – because you never know where it might lead … 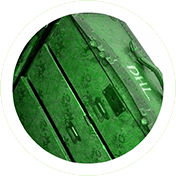 In the DH Lawrence Memory Theatre we want to address various aspects of Lawrence’s life through artefacts to try to understand this complex writer.  How do we capture his views on nature and alternative living while exercising caution about using the prefix ‘eco’? What would the Kibbo Kift have looked like if it’d been devised by Lawrence? In 2019 we will be building our Memory Theatre and retracing Lawrence’s savage pilgrimage both physically and digitally. If you have an idea for an artefact get involved and submit ideas here.

[2] Gardiner was also an associate of Lord Lymington and the rather sinister English Array. A journal edited by Lymington, The New Pioneer, to which Gardiner was a frequent contributor, affirmed a form of eco-nationalism in which an analogy was drawn between farm and nation, effectively transforming citizens into livestock. For further details on this and many of the other points discussed here, see Anna Bramwell’s Ecology in the Twentieth Century: A History (Yale University Press, 1989) and her earlier work Blood and Soil: Walther Darré and Hitler’s Green Party (Kensal Press, 1985). Readers of Lawrence interested in his relationship to German culture and his green critique of industrialism and technology, should also see Anne Fernihough’s D. H. Lawrence: Aesthetics and Ideology, (Oxford University Press, 1993).