“Is life strife, is it the long combat?
Yes, it is true. I fight all the time.
I am forced to”
The Battle of Life, D.H Lawrence

“If we must die, O let us nobly die,
So that our precious blood may not be shed
In vain; then even the monsters we defy
Shall be constrained to honor us though dead!”
If We Must Die, Claude McKay

As a rebel writer, D.H. Lawrence spent his entire life fighting against people and systems. Ideas expressed in early novels, such as The Rainbow (1915), took on the ideologies of religion, marriage, family, sexuality, and national identity. In the subsequent Obscenity Trial, Judge Sir John Dickinson went as far as to describe the novel as anti-British, claiming that Lawrence was mocking the very principles that British soldiers were defending. Lawrence was very good at winding people up.

To compound matters, Lawrence married a German woman on the outbreak of WWI and moved to Cornwall, where he was accused of being a spy and had his passport removed. On and on the battles went throughout his short life – and not just with his novels. When he turned his hand to painting and exhibited works at the Warren Gallery in 1929, 13 were seized and placed in a prison cell! The Daily Telegraph reported the paintings were “gross and obscene” the likes of which had “never been seen in London before”.

Understandably, Lawrence came to resent intellectualisation and what he described as “mental consciousness”. This form of thinking produced “ugliness, ugliness, ugliness” and was responsible for the “iron machine” of industrialisation and the subsequent exploitation of workers in favour of profit. A world in which people lived in their heads had a dehumanising effect, further removing man from his natural connection with the environment. It is little wonder, then, that Lawrence developed a philosophy of “blood consciousness”, a more sensuous and guttural connection with the world which was incorrectly interpreted as smut by the censor.

Given that Lawrence fought the establishment throughout his life, it is perhaps not such a surprise that he was an influence on black American poets of the 1940s and 1950s, specifically Claude McKay, Jean Toomer, Langston Hughes, Richard Wright and Ralph Ellison, or so argues Leo Hamalian in a journal article from 1990. As Langston Hughes put it, “Negro writers, just by being black, have been on the blacklist all our lives”. If it was difficult for a miner’s son with a provincial accent to be accepted by the literati, imagine how difficult it was for a black person.

Claude McKay (September 15, 1889 – May 22, 1948), one of the pioneers of the Harlem Renaissance of the 1920s, detailed the intense racial violence against black people in poems such as ‘If We Must Die’. Originally attracted to communist ideas, he helped form the African Black Brotherhood as a means of achieving social emancipation. Like Lawrence, he travelled far afield to find peace. He lived in the UK and USA, experiencing every form of racism imaginable, had an “ecstatic welcome” in Russia due to his political beliefs, before heading to the more open-minded Parisian backstreets. However liberal Paris was, there was still a lot of work to be done. He wasted no time highlighting the stereotyping of sexualised black figures in the art world which he argued helped to reproduce social hegemonic values that legitimated (European) white supremacy over Afro-Caribbean identities.

Like Lawrence, McKay’s novels outlined an instinctual/intellectual duality. But the two writers had very different reasons for doing this: Lawrence was desperate to escape modernity and so outlined a philosophy of spiritual individualism which he called Rananim – a search for a community of like-minded people. It could be argued, for example, one of his main objections to the war was not moral, rather resentment at being told what to do and where to go!

McKay wanted to empower black people. He implored individuals to stand up for their rights and to be accepted as equals. It goes without saying this came with real risks, most notably lynching and murder. McKay’s travels, then, were not so much about escape but rather finding acceptance within modernity. This is perhaps best exemplified in his 1928 novel Home to Harlem which gave voice to romantic homosexual relationships while forging a distinctive black identity for the “uprooted black vagabonds” – such as himself – who found themselves exploited and used in Western communities.

Writing in his autobiography, McKay states that in Lawrence “I found confusion – all of the ferment and turmoil, the hesitation and hate and alarm, the sexual inquietude and the incertitude of this age, and the psychic and romantic groping for a way out.” Lawrence’s appeal, “lay instead in his compulsive and impassioned struggle to overcome the psychological traps that threatened to imprison and destroy man’s direct appreciation of life and it’s mysteries in the modern age.”

Lawrence grew up in a mining village, McKay came from a family of peasant farmers. They both understood what it meant to struggle. They knew what it was like to have a domineering matriarch in the family. McKay expressed this in poems such as ‘December 1919’ and ‘Mother’, Lawrence addresses it in just about every novel he ever wrote. They also shared similarities in their social status as outsiders in the world of Literature, as well as being young men with strong ideas on how to forge their way in the brave new world. But the trait that McKay felt best mirrored his own was a “psychological restlessness that drove him steadily towards artistic achievement and away from marginal existence of his natal community in his own life.” 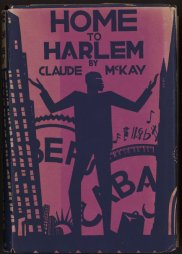 In 1977, McKay was posthumously awarded the Order of Jamaica for his contribution to literature. As a left wing liberal he paved the way for future generations of black writers, such as James Baldwin, who would continue his fight. His natal community was proud of what he achieved. The same can’t be said of Lawrence, despite being part of the canon, and paving the way for everyone to swear more freely. He famously wrote, “I can be anywhere at home, except home”. Eastwood has never forgiven him.

In November 2019 we will launch our D.H. Lawrence Memory Theatre. It will be comprised of artefacts that piece together Lawrence’s life, offering an alternative to the linear biography. How do we represent his influence on writers such as Claude McKay? How do we get across complex ideas like blood consciousness? Get involved and help us bu submitting an artefact here.