Born in 1879, Mabel Dodge Luhan (MDL) had a difficult childhood. Her controlling wealthy parents were incapable of affection meaning her childhood was lived ‘in a rigid unlovely inescapable pattern.’ Art offered her the emotional connection missing from family life and would lead to her finding escapism as a patron of the arts in Taos, New Mexico. It was here that she hoped to build a colony that would offer an alternative to the mechanical modernism of Western society. Lawrence arrived in September, 1922 but their relationship would turn sour due to a clash of personalities.

Her memoir of their time together is absolutely bonkers; a mixture of psychic discord and infatuation, laced with snipping comments. Take this early description of Lawrence. She makes it quite clear that he’s not her type, yet throughout her memoir she pines for his attention. ‘(He) is tall, but so slightly built and so stooped that he gives the impression of a small man. His head seems too heavy for his slim body and hangs forward. The whole expression is of extreme fragility…He has very large, wide-apart grey eyes, a long, slender face with a chin that is out of proportion long, a defect that is concealed by the aforesaid beard. His upper lip protrudes from his dainty decoration of the beard in a violent red that makes his beard look pink. In the midst of all this, is a very podgy, almost vulgar, certainly undistinguished nose.’

Lawrence’s slenderness is in stark contrast to Frieda’s solidity, something MDL is keen to point out again and again in their opening encounter (as recorded in our previous blog). But after sending Lawrence out to see an Apache Fiesta with her ever so considerate husband Tony, she has the opportunity to spend a bit of time with Frieda. She observes she is better company when Lawrence isn’t around, ‘as is the case with all wives’.

But MDL isn’t interested in bonding with the earthy Frieda – who prefers fags to fonts – she only has eyes for Lawrence. Hoping that he will pen a novel about her journey from New York to New Mexico, she invites him over to her place but makes the mistake of not getting dressed. Lawrence, despite his reputation as a smutty author, was, by all accounts, a bit of a prude. Her casual attire no doubt made him feel uncomfortable, an unnecessary sexual pressure. In Dorothy Brett’s memoir, she notes how ‘you do not care to be touched, to be pawed. Necking makes you furious. Your sex is not to be played with, nor to be belittled by playfulness. It is serious, a danger to be respected as the tiger is respected, hidden in the jungle.’

It’s not surprising, then, that he immediately reported back to Frieda who from that point onwards insisted they work in their house while she was around. This was immensely frustrating for all involved and denied MDL ‘the opportunity to get at him and give him what I thought he needed’. The lack of privacy meant she was unable to ‘unload my accumulation of power’ on him. And so begins the struggle for possession of Lorenzo that will inevitably end up in tears for all involved, as well as bruises for Frieda.

When Lawrence turns down MDL’s psychic advances, the claws come out. She accuses him of power games, and vacillating between the two women. When siding with Frieda he would ‘sling mud at the whole inner cosmos, and at Taos, the Indians, the mystic life of the mountain’ and when with MDL he would ‘talk just wonderfully, with far reaching implications, of the power of consciousness, the growth of the soul’. She reiterates once more that she wanted Lawrence for his mind rather than his body as ‘he’s not physically attractive to women. I don’t think women want to touch him.’ But rather than being an honest appraisal of her feelings, it reads more like an attack on Frieda for desiring him. Or, perhaps, the bitterness of a woman scorned.

Throughout their time together, MDL never once saw Lawrence just sit. Meditation wasn’t his thing. On his protracted trip over to New Mexico he stopped off at Ceylon. After getting bad guts he took his frustration out on the Buddha statues, complaining “Oh I wish he would stand up!” He was certainly restless, although MDL observes that it was more than restlessness, he was pernickety, and a bit of a pain in the arse.

MDL was the daughter of Charles Ganson, a wealthy banker from Buffalo, New York. Her upbringing was in stark contrast to that of Lawrence’s in the mining community of Eastwood. It was no wonder he was restless. Leisure wasn’t a luxury of the working classes. ‘(He) really had very little sense of leisure. After the housework was done, he usually crept into a hedge or some quiet corner and wrote something, sitting on the ground with his knees drawn up.’ The problem was, he wasn’t writing about her.

All of this housework enabled Lawrence to instruct others on the virtues of cleanliness. ‘You don’t know your floor until you have scrubbed it on your hands and knees.’ This wasn’t an option for MDL as she had miles of floors. It would take her all day to clean, time better spent on more useful pursuits, such as connecting with the cosmos. She had servants to do the chores for her. Needless to say Lawrence disapproved, believing servants removed contact with life. He would apply the same criticism to cars that sped past through the living world, though he didn’t mind a lift when it suited him.

MDL describes her body as being square and therefore she tried to mask her solidity through loose fitting clothes that hung off the shoulder. Lawrence didn’t approve of this either, believing the female form should be celebrated rather than concealed, proclaiming ‘the kind of clothes my mother wore were the most-lovely pattern any woman could have’.

Despite their clashes over housework and clothing, there were many happy occasions too. MDL taught Lawrence to ride horses which he would be eternally grateful for. He seemed to pick it up really quickly, despite ‘riding as though the saddle hurt’. It meant that they could go on long rides together. But even this backfired when Lawrence taught Dorothy Brett to ride and ended up preferring her company on long journeys, presumably because they often rode in silence on account of her deafness. 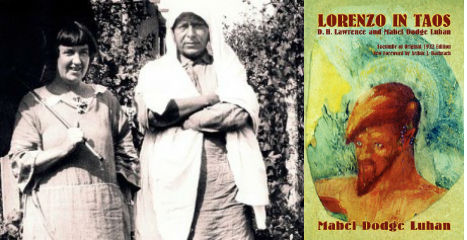 When MDL decided to give marriage a fourth shot, she married Native American Indian Tony Luhan in 1923. He persuaded her to buy a 12-acre (49,000 m2) property which included a ranch up on Lobo Mountain which Lawrence would fictionalise in the novella St. Mawr. The ranch was a present to her son John who was engaged to marry Alice Corbin. Despite her feminist principles, MDL asked Lawrence to give him a bit of advice. John reported he was advised ‘Never to let Alice know my thoughts. To be gentle with her when she was gentle but if she opposed my will, to beat her’. Despite this ‘useful’ advice, the two inevitably soon fell out.

It wasn’t long before Lawrence had had enough of ‘Mabeltown’ and so he and Frieda rented a separate cottage further up on Del Monte Ranch. MDL hoped that corresponding via letters may give her the intimacy with Lawrence that they’d been unable to achieve in person, but again she was wrong. These were shared with Frieda, ‘just to make everything square and open’.

Lorenzo in Taos is a fascinating social document that captures an earnest attempt to forge alternative ways of living in between the Great Wars. Some observations make you cringe and wince and are unintentionally hilarious. But there are some prescient observations too that shed light on life with a notoriously difficult writer.

‘Of course he was often gay. I don’t want you to think that in those first years he was cross or morose all the time. He was all right so long as things went his way. That is, if nothing happened to slight him. He simply couldn’t bear to have anyone question his power, his rightness, or even his appearance. I think his uncertainty, about himself, a vague feeling of inferiority, made him touchy.’

In the DH Lawrence Memory Theatre we want to address various aspects of Lawrence’s life through artefacts. How could we represent the tension between Lawrence, Frieda and Mabel Dodge Luhan? If you have an idea about this or other artefacts you think should be included, you can submit ideas here.

3 thoughts on “Lorenzo in Taos 3: Mabeltown”